“You can sleep in today.  It’s a snow day.”  Those are the sweetest words a kid can hear.  We heard them at least once or twice a winter when we were growing up in Connecticut.  It had to be a humdinger of a snowstorm for school to be cancelled.  Otherwise, we would have had snow days once every couple of weeks.  Fortunately—or unfortunately for us kids—Connecticut had plenty of snow removal equipment, so snow days were a rare treat. 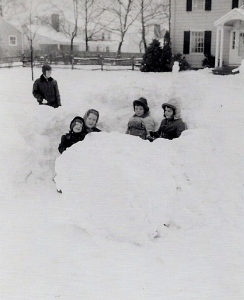 We’d snuggle deeper into the covers and listen to the wind howl.  After a breakfast of hot cream of wheat, we’d spend twenty minutes getting ready to brave the outside.  We donned snow pants, hooded  parkas, boots and idiot mittens and head outside to build a snow fort.  We stayed out so long our eyeballs froze.  We’d come in for lunch—a steaming bowl of Campbell’s tomato soup and grilled cheese sandwiches—and head outside again.  At bedtime we prayed that we’d have a second day of the same.  No such luck.

When I was an adult and we moved to San Antonio, my children didn’t get to experience snow days.  Obviously.  Except once.  We had a freak snow storm that left us with thirteen inches of snow for one day before it melted.  San Antonio has no snow removal equipment, so we had a snow day.  The kids played outside in their cowboy boots.  Who owned snow boots in San Antonio? 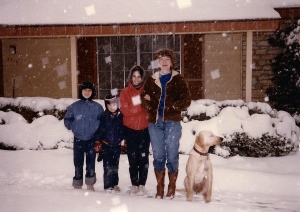 And now we live in Virginia Beach, as south as you can get in Virginia before you get to North Carolina.  Snow is not an impossibility, but it is highly unlikely.  A huge snow storm is now descending on the Northeast.  If it had moved just a tad to the south, we’d be having a snow day tomorrow.  My husband would love to hear those words:  You don’t have to go to work today.  It’s a snow day.” I keep hoping and wishing that it still could happen.  We wouldn’t need too much, just an inch or two.  Virginia Beach has very little in the way of snow removal equipment.  Obviously.

Meanwhile, my Boston children are giddy with snow-day excitement.  They bought snow saucers in preparation.  We never outgrow the kid in us.

I am a writer, wife, mother, and grandmother who thinks you're never too old until you're dead. My inspiration is Grandma Moses who became a successful artist in her late 70's. If I don't do something pretty soon, though, I'll have to find someone older for inspiration.
View all posts by Coming East →
This entry was posted in Just Blogging and tagged children, home, kids, life, memories, nosta, San Antonio, Snow, Virginia Beach, weather. Bookmark the permalink.