The Soul of a Musician

Adele, Adam Levine, Jason Mraz, and Ingrid Michaelson are just a few of the musicians I’ve been listening to lately in an attempt to update myself on popular music, so I won’t seem so square to my granddaughters. Music is these very talented individuals’ livelihood. But there are other musicians out there who can’t make a living from their musical passion. They may be doctors or lawyers, teachers, grocery clerks, or housewives who play an instrument or two, some very well and some very poorly, and it matters not to them that they don’t sound like professional musicians. They just like how music makes them feel. They are like writers who have no choice but to write. Musicians have no choice but to play. 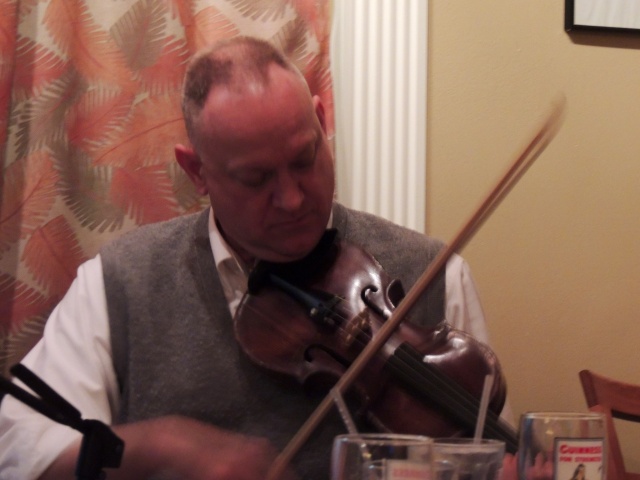 Last night my husband and I had a date night. We went to a little local pub for fish and chips and to listen to some amateur musicians play Irish music. It wasn’t a large group: two fiddles, an Autoharp, a banjo, and a man who played both the guitar and penny whistle. Every seat in the pub was filled for this weekly Wednesday night occurrence. Sometimes more musicians show up. They began with “Red-haired Boy,” a popular Irish tune, and then each musician took turns choosing a song and being the featured player. Some were beginners, and others were quite experienced. I understood their need to be there. I gave birth to three musicians.

I remember when one of our sons went to law school in Boston. We were still living in Texas at the time, and I was worried about how hard it would be for my son to adjust to a big northern city and the frigid weather, plus the difficulty of law school. He called a few weeks after he was settled, and I asked him how things were going. “Great!” he answered, excitement in his voice. Ah, he’s liking school, I thought. Then he continued, “We found a drummer!” He had not wasted any time in getting together with other musicians to play. Even when a musician cannot make a living from music, the passion never dies. I know. I may take my violin in to get repaired this weekend. You never know when that neighborhood pub may need an extra fiddle.

P.S. I was saddened to hear of Van Cliburn’s passing yesterday. My husband and I were privileged to have heard him perform at Trinity University in San Antonio. We remember that dynamic, passionate performance so clearly and his sense of humor. After numerous encores because we, the audience, kept clapping until he played another piece, he played a short waltz and said, laughing, “Go home!”

I am a writer, wife, mother, and grandmother who thinks you're never too old until you're dead. My inspiration is Grandma Moses who became a successful artist in her late 70's. If I don't do something pretty soon, though, I'll have to find someone older for inspiration.
View all posts by Coming East →
This entry was posted in Just Blogging and tagged Irish music, life, music, musicians, personal. Bookmark the permalink.

30 Responses to The Soul of a Musician