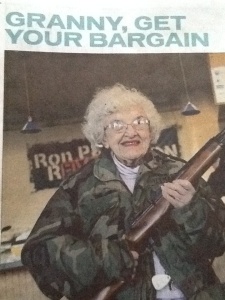 Hey, you wanna go get a pizza with me?  Yeah?  Well, grab your gun and let’s go.  You heard me right—I said to grab your gun.  There’s a pizza shop right here in Virginia Beach that offers a 15% discount to customers who walk in toting a gun or their concealed handgun permit.  The owner got the idea from an ice cream shop in Utah that thought of this brilliant idea first. He says that since he instituted the discount last Friday, about 80% of his customers have taken him up on his offer. So let’s get on board! I know I will feel so much safer sitting in a pizza restaurant with 80% of the people around me carrying weapons. Won’t you?

I would have thought a story like that was an April Fool’s joke if it were April 1st, but it’s not. I saw it on the front page of the local section of our newspaper this morning, along with a huge picture of a gun-toting grandmother. I can tell you that will definitely be a pizza shop I won’t be going to. I wonder how many of those gun-slinging patrons would be squawking about the inappropriateness of a woman breastfeeding in a restaurant. I can hear them now. “Breasts have no place in public.” But guns do.

I am a writer, wife, mother, and grandmother who thinks you're never too old until you're dead. My inspiration is Grandma Moses who became a successful artist in her late 70's. If I don't do something pretty soon, though, I'll have to find someone older for inspiration.
View all posts by Coming East →
This entry was posted in Just Blogging and tagged Breastfeeding, Concealed carry in the United States, Gun control, Gun rights, Guns, life, Virginia Beach. Bookmark the permalink.

40 Responses to Pizza and Pistols