The Story of our Lives

Last year my husband bought me volume one of Mark Twain’s autobiography, a book of 736 pages in small type.  Two more volumes are forthcoming.  Most everybody knows that Mark Twain refused to have his autobiography published until 100 years after his death.  One reason was because he didn’t want to offend anyone still living, so he said.  The other reason was because he didn’t think it was even possible to capture his life in words.  He wrote:

“What a wee little part of a person’s life are his acts and his words!  His real life is led in his head, and is known to none but himself.  All day long, and every day, the mill of his brain is grinding, and his thoughts, (which are but the mute articulation of his feelings) not those other things, are his history…These are his life, and they are not written, and cannot be written.”

How can we tell the story of our life except through our own interpretation, and doesn’t that interpretation keep changing?  So many events are lost to me, and the ones I remember look different each time I think of them, as if I’m seeing them through different lenses.  Yet each time they seem so real, as if I were living them again.  I understand what Mark Twain meant when he wrote about his life on the farm:

“I can call back the solemn twilight and mystery of the deep woods, the earthy smells, the faint odors of the wild flowers, the sheen of rain-washed foliage, the rattling clatter of drops when the wind shook the trees, the far-off hammering wood-peckers and the muffled drumming of wood pheasants in the remotenesses of the forest, the snap-shot glimpses of disturbed wild creatures skurrying through the grass,—I can call it all back and make it as real as it ever was, and as blessed.”

I have only to close my eyes and I am in my grandmother’s kitchen again on East 98th street in Manhattan, sitting at the table as she brought me a soft-boiled egg with a pat of butter in the cracked white egg cup.  I can hear the horns honking and the sirens screaming, I can smell the steamy pavement and feel the stillness of the summer air as I hung out the window and watched the traffic.  Yes, I can bring it all back to me, but I cannot write so you can see it the way I see it because it goes beyond words.  The feelings of my life are my story, are my history. 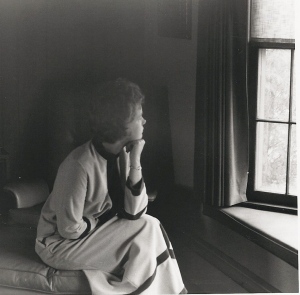 I have this picture of my mother when she was about the age my daughter is now.  My father captured her in a pensive moment early one morning as she sat by the window in her robe.  I wonder what she was thinking?  Her expression makes me think that she was deep in thought about her life.  I wonder how she interpreted that life?  What history was she writing in her thoughts and feelings?  We think we know the story of a person’s life, but we only know some facts, and even  those can’t be trusted.  History without feelings is empty.

I am a writer, wife, mother, and grandmother who thinks you're never too old until you're dead. My inspiration is Grandma Moses who became a successful artist in her late 70's. If I don't do something pretty soon, though, I'll have to find someone older for inspiration.
View all posts by Coming East →
This entry was posted in Favorite posts, Just Blogging and tagged family, home, life, Literature, Mark Twain, memories, personal, women. Bookmark the permalink.

51 Responses to The Story of our Lives