One of our sons gave us a French press coffee maker for Christmas last week.  It was a very thoughtful gift, especially since we’ve enjoyed many great cups of coffee made in our sons’ French presses when we visit them in Boston, and we always comment on how delicious the coffee is. 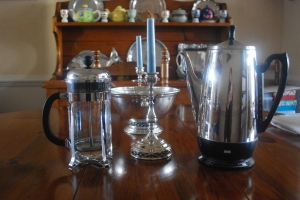 My son said he knows we still use our 40-year-old General Electric percolator, but he thought we might enjoy making a smaller pot of the really good stuff for just the two of us.

Okay, I’ll admit the coffee made in the French press has a certain body and complexity the percolator coffee lacks, and maybe forty years is a bit long to hold onto the old ways, but I used to make our coffee on top of the stove in the non-electric version of a percolator, so the electric percolator is a step up.  I love it when our kids figuratively take us by the hand and show us that there are better ways to do some things.

I’d like to think that I was the same way with my parents, but the truth of the matter is that my father was way ahead of the game.  He was into computers many years before they became a household item.  He had the latest and best cameras and knew all about setting f-stops and apertures.  He never bothered with the automatic mode, even when it became standard.  He knew about pistons and cylinders and torque and blah, blah, blah  about how car engines work.  And he could fix just about anything. He was handy with all kinds of tools, including jig saws and circular saws, and saws I don’t even know the name of.  He built our garage all by himself when I was growing up.  Yes, I’m not making this up, and that garage is still standing, nearly sixty years later.  I know because I drive by it every time we go to Connecticut.

While our children like to modernize us a bit, I wonder what they’ve learned from us that they will think is modern or sophisticated.  I know the boys are learning about how to use tools from their dad.  My husband wanted to buy a power drill for a Christmas present for our sons to share.  “Really?”  I said.  “What kind of a present is that?  Who gets excited about a power drill?”  Okay, must be a guy thing because I was dead wrong.

So, specifically, maybe I’m wondering what the kids have learned from me?  Oh, sure, I know they’ve learned about respect and integrity and basic cooking skills and how to do laundry and all those things we naturally teach our kids if we’re responsible parents.  But what will they look back on years from now and think, “You know, Mom was a modern, innovative person because she_____.”  I’m having a hard time filling in the blank!

I am a writer, wife, mother, and grandmother who thinks you're never too old until you're dead. My inspiration is Grandma Moses who became a successful artist in her late 70's. If I don't do something pretty soon, though, I'll have to find someone older for inspiration.
View all posts by Coming East →
This entry was posted in Just Blogging and tagged aging, children, Coffee, Coffeemaker, family, French press, home, life, motherhood, parenting, personal, relationships, women. Bookmark the permalink.