The Light in the Forest

Many long years ago, when I was a young teenager, I read a novel entitled The Light in the Forest by Conrad Richter.  It was about a teenage Pennsylvanian boy who was kidnapped by the Lenni Lanape Indians, raised as one of them, and later returned to his blood kin.  The forest was an important part of the setting, and I always loved the images the title evoked.

Sunday, on a glorious afternoon, my husband and I went hiking in First Landing State Park here in Virginia Beach.  The name First Landing commemorates the Virginia Company‘s landing on Cape Henry in 1607  before they moved westward and formed Jamestown, the first permanent English settlement in North America.

Although it was a very sunny day, once we entered the woods, I no longer needed my sunglasses.  I brought my camera along and snapped some pictures.  I want to share some with you, just so you know that, even though I live in a sizable city, nature is not far away.  In these photos, look at the light in the forest.

The bald cyprus swamp below reminds me of Yoda‘s planet of Dagobah.  All that’s missing is the fog…and Yoda, Luke, and R2D2, of course.

It was nice to see a little fall color making its appearance among the muted greens and browns: 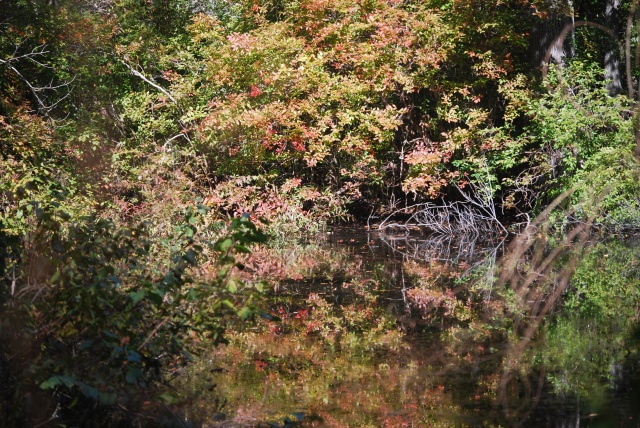 My camera didn’t miss the small things, either.  Notice how the light illumines the fungi:

Light filtering through the Spanish moss: 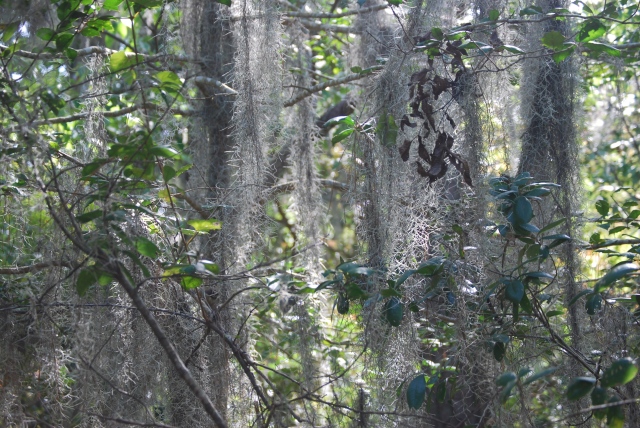 I am a writer, wife, mother, and grandmother who thinks you're never too old until you're dead. My inspiration is Grandma Moses who became a successful artist in her late 70's. If I don't do something pretty soon, though, I'll have to find someone older for inspiration.
View all posts by Coming East →
This entry was posted in Just Blogging, pictures and tagged Cape Henry, First Landing State Park, Jamestown, Light in the Forest, personal, Photograph, photography, photos, Pictures, Virginia Beach, Yoda. Bookmark the permalink.

30 Responses to The Light in the Forest