Friday I had the blues, so I headed to the shore, hoping to dispel my somber mood.  I don’t know if you are anything like me, but I suspect I’m not alone in finding fault with just about everything when only one small thing starts that blue mood.  I didn’t go to the busy Oceanfront but chose my secluded First Landing Beach where the Chesapeake Bay meets the Atlantic Ocean.  I sat in my beach chair looking at nine big tankers waiting to cross over the Chesapeake Bay Bridge Tunnel.  One was so close to shore, it looked as if I could almost swim out to it. 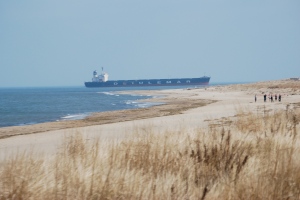 A navy ship of some kind was passing, going in the opposite direction. The sky, though deeply blue, was filled with a blanket of clouds that hid the sun, and I zipped my sweatshirt against the cool breeze.  In front of my chair the sand was littered with shell fragments, mermaids’ purses, crab claws, and dried sea grasses and sea oats.

Then the magic of the sea took over.  I started looking for seashells for my sister, Karen, to put in the jar I keep for her.  My spirit lifted as I concentrated on finding something new or unexpected.  Instead of filling my mind with things I was sad about or disappointed with, I focused on one small thing at a time.  I found the jawbone of a fish with tiny teeth, a piece of a nautilus, barnacles on a log, stones smooth as glass.  My eyes were drawn to a flock of pelicans skimming the surface of the water, and that’s when I saw something I’d never seen there before, though I know the Bay is full of them.  I saw a skate in the shallows near the shore, right in front of me.  I knew skates were plentiful from the number of mermaids’ purses scattered in the sand, but it was the first time I had seen one for myself in its natural habitat.

I would have missed it if I had sat pouting in my chair.  I watched, fascinated, until the skate skated away, and then I continued my shell search with renewed enthusiasm.  I found more and more treasures to fill my pockets, and every shell or stone became a blessing and my blessings were overflowing.  Thank you again, dear sister, for sending me to the shore for another lesson. 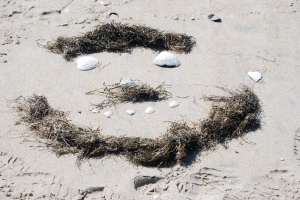 I am a writer, wife, mother, and grandmother who thinks you're never too old until you're dead. My inspiration is Grandma Moses who became a successful artist in her late 70's. If I don't do something pretty soon, though, I'll have to find someone older for inspiration.
View all posts by Coming East →
This entry was posted in Just Blogging, Seashells for Karen and tagged Chesapeake Bay, Chesapeake Bay Bridge-Tunnel, inspiration, lessons, life, personal, postaweek2011, women. Bookmark the permalink.

4 Responses to One Small Thing