When I first saw this week’s photo challenge, I took a picture of the first butterfly I saw in my garden this season.  It was unusual, at least not like the ones I was used to seeing in San Antonio, and it was enjoying my chive blossoms. 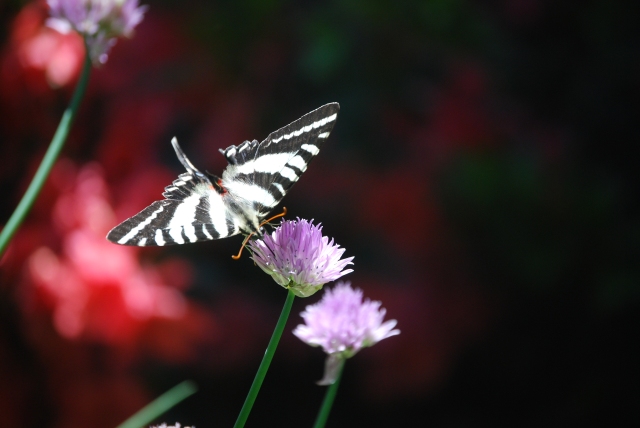 Does anyone know what kind of butterfly this is?

But then yesterday we were at my brother’s in Chester, Virginia, celebrating Mother’s Day, and my brother showed me this little mother who had made a nest in his pot of basil.

My sister-in-law thought she should offer this little mama a glass of wine because she looked like she needed one.

My brother said he doesn’t know what possessed her to build her nest in such a strange spot.  The pot is on the railing of their deck, right outside their back door and easily accessible to stray cats, of which there are many in the neighborhood.

Sadly, these little eggs will probably not get a chance to hatch before a predator gets to them. Mama bird, what were you thinking?

I am a writer, wife, mother, and grandmother who thinks you're never too old until you're dead. My inspiration is Grandma Moses who became a successful artist in her late 70's. If I don't do something pretty soon, though, I'll have to find someone older for inspiration.
View all posts by Coming East →
This entry was posted in Just Blogging, pictures and tagged birds, Butterfly, life, Mother's Day, nests, photography, postaweek2011, weekly photo challenge, Wildlife. Bookmark the permalink.