(Forgive me, WordPress, for I have sinned.  It has been over a year since I posted last.) 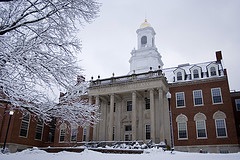 “I was on the UCONN website today,” my husband said, “and the cover photo was the Wilbur Cross Library in the snow. What a flood of memories that brought back. I could picture you making snow angels.”

My husband and I met at the University of Connecticut forty-five years ago. Though many buildings have been added to the campus and a “downtown” was finally built in the tiny hamlet of Storrs just a couple of years ago, not much has really changed. UCONN is still in an isolated part of the state, in a valley that fills with snow starting in late October.

I remember spring semester my freshman year. (They need to rename that semester because spring doesn’t arrive until a week before school lets out.) I waded knee deep in snow, the hairs in my nose freezing with each breath, to get to an eight-o’clock chemistry class on the other side of campus, next to the cow barns. Pure agony!

But separated by decades and many miles, I, too, look back with nostalgia on those white winters. The quiet. The peace that blanketed the campus with each falling flake. Walking hand-in-hand with my sweetie across the frozen landscape. The whiteness reflected the innocence of our youth.

Living in Virginia Beach now, most of the whiteness we see is the sand on the shore. But once in awhile, the weatherman teases us with the hope of a snowfall. Not the deep, penetrating ones of those long-ago years, but a small one, enough to remind us of a time when a cup of hot chocolate from the machine in the basement of my boyfriend’s dorm was the best tasting thing on earth.

I am a writer, wife, mother, and grandmother who thinks you're never too old until you're dead. My inspiration is Grandma Moses who became a successful artist in her late 70's. If I don't do something pretty soon, though, I'll have to find someone older for inspiration.
View all posts by Coming East →
This entry was posted in Just Blogging and tagged life, Love, memories, nostalgia, personal, UCONN, weather, winter, women. Bookmark the permalink.

56 Responses to Romanticising the Weather