Mondays are my days with three-year-old T.  We listen to my music boxes and sing along to the tunes, we drum and shake, rattle, and chime with my special little people’s musical instruments, we go to the playground and squeal down the slide, and we eat peanut butter on crackers and drink chocolate milk.  But what T. loves the most is playing cars with me.  I keep a box of my sons’ old Matchbox and Hot Wheels cars in the den and some of their action figures to act as customers who want to buy the cars.  Count Dracula is our parking lot attendant. 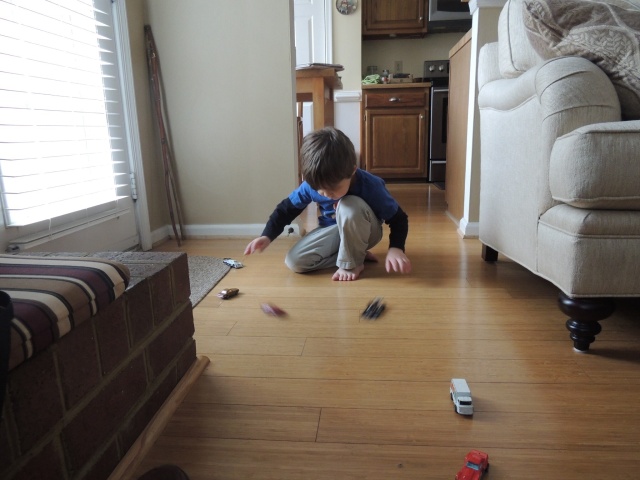 T. likes to race the cars on my hardwood floors. We each get to pick our favorites to go against each other. We count to three and let them rip. No matter where our cars end up, T. says, “I win!” His car could crash into the nearest wall while mine sails into the kitchen five feet farther away, and he still yells, “I win!” It doesn’t matter that I point out how much farther my car went, although one time, when T. was in a particularly magnanimous mood, he conceded that we tied, even though his car had made a U-turn under the sofa. Clearly, I don’t understand the rules.

I would like to say that this is a masculine characteristic, this need to always be first, to always win, but one of T.’s sisters is very much like him in that respect. I’ve worked on her over the years, and finally, at the mature age of five, if she isn’t winning, she is gracious enough to say, “It doesn’t really matter who wins anyway,” followed quickly by, “Let’s do something else.” I also remember my youngest granddaughter being picked up by her dad and carried to her room during a game she was playing with the rest of us and losing badly. I can still picture her kicking and screaming, “But I want to win! I want to win!”

I don’t think this is always a characteristic of children. It is interesting to note that T.’s oldest sister, seven-year-old C., loses in chess with me and it doesn’t seem to bother her in the least. She just smiles and sets up the pieces again. She loves the game itself. I would let her win if I thought she would lose interest otherwise, but she’s going to be beating me in no time, and I want to savor the feeling of winning for a little while longer before it is a distant memory.

When we were kids, my brother and I would play Monopoly, and sometimes the game could go on for hours and hours, far beyond the point that I cared about it anymore, but my brother would not give up. He usually won because I made ridiculous deals with him, like giving him all the railroads back, plus Park Place with all its hotels, plus $5000 in exchange for his get-out-of-jail card. I just wanted the agony to be over.

No one loves to lose, of course, but winning is nice for some people and everything to others. It’s not the game but the win that’s important.

To read more on T., see déjà Vu All Over Again.

I am a writer, wife, mother, and grandmother who thinks you're never too old until you're dead. My inspiration is Grandma Moses who became a successful artist in her late 70's. If I don't do something pretty soon, though, I'll have to find someone older for inspiration.
View all posts by Coming East →
This entry was posted in Just Blogging and tagged children, humor, life, Personalities, relationships, Winning and losing. Bookmark the permalink.

22 Responses to Winners and Losers