Why is it that at a certain age, children who used to be perfect photographic subjects, change into children with cheesy smiles? One day you can take a lovely picture of them, and the next day, and for at least a year thereafter, you cannot get a decent picture of them from the neck up.

Take my short little friend next door. I have great shots of that great little face of hers. But like a switch was just thrown, now I cannot get a good picture if my life depended on it. What’s more, every time she comes over, she wants me to take her picture. I now have a whole digital file of cheesy smiles. Even when I show her what her picture looks like, she tells me it looks really, really good. That’s another thing about kids: There is not a modest bone in their little bodies.

This past week, after I took her picture, I told her she was squinting her eyes so much, it looked like they were closed. “Open your eyes next time,” I said before I took the next shot. This is what I got: 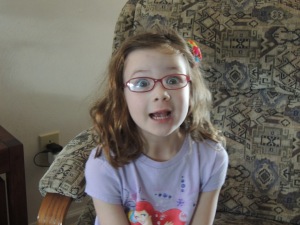 My dear little friend is not the only child, of course, who does this. If you were to peruse your own photo albums, I’m sure you would find scads of pictures of your own children or grandchildren when they were going through the cheesy smile phase. You just have to weather it until they get over themselves, which for many children could take a fairly long time. I went through a few albums of my own and did notice some similar faces, such as this one of my youngest:

I couldn’t find any of those kind of pictures of my middle child, but he was a rather serious little fellow. My daughter also didn’t have too many cheesy smile pictures when she was growing up. However, I think that was because she saved them for her later years, such as her sixteenth birthday.

I’m supposed to visit her in a few weeks. I hope she doesn’t rescind her invitation.

I am a writer, wife, mother, and grandmother who thinks you're never too old until you're dead. My inspiration is Grandma Moses who became a successful artist in her late 70's. If I don't do something pretty soon, though, I'll have to find someone older for inspiration.
View all posts by Coming East →
This entry was posted in Just Blogging and tagged children, family, humor, life, photography. Bookmark the permalink.

24 Responses to Children are Strange