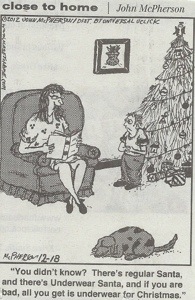 This comic that I saw in yesterday’s Virginian Pilot newspaper triggered memories of Christmas presents I’ve gotten as well as given. When I was a youngster, I don’t remember having long lists of items I wanted to show up under our Christmas tree. I was happy for whatever my parents picked out. There was this one time, though, when I was either in eighth grade or just beginning high school that I wanted a tennis sweater. For those of you uninitiated, tennis sweaters were once the rage. They were usually white or cream cable-knit V-necked pullovers which featured two bands of color, one blue and one red, around the neck, sleeves and bottom. They were very preppy. You didn’t even need to have ever held a tennis raquet to own one. I had seen a tennis sweater in the window of the department store in the center of town as I walked home from school one day. I wanted that sweater. I lusted after that sweater. Since I was not one to ask my parents for anything specific, they knew I was serious when I told them I really, really, really wanted that sweater. And yes, they did buy it for me, and yes, I did look quite the prep.

Giving presents was as exciting for me as getting them. I always put a lot of thought into my presents. One year I saved for months to buy my big brother an ice hockey stick. He was an excellent skater and played hockey with his high school buddies on the many frozen ponds in our town in the winter. I knew he would love a brand new hockey stick instead of the beat-up one he was using. I saved and saved my allowance and couldn’t wait to see his face on Christmas morning when I gave it to him. That was the Christmas he gave me a little wooden pig about the size of an acorn. I wonder if he contemplated what my face would look like when he gave it to me.

Thinking of my brother triggers another gift-giving incident the first Christmas I was married. My husband and I were living in the tiny town of Storrs, Connecticut where my husband was a police officer at the university. My brother was in graduate school there at the time. I had found the most gorgeous chess table in a shop there. It was Russian and when you opened it up, it played Lara’s theme from Dr. Zhivago. Even though it was very expensive and cost much more than I had intended to spend, it was such an amazing find and one that I knew my husband would love, so I bought it.

The problem was I had to figure out how to get it down to Fairfield, Connecticut, where we were spending the holidays with our parents, without my husband seeing it. No problem. I would just give it to my brother and he could bring it when he came. Now picture this. I am in church at the eleven P.M. candlelight Christmas Eve service.  My husband is sitting on one side of me and my parents are on the other. My brother is on the far side of my parents. I’m having a hard time staying focused on the service because I can’t wait until Christmas morning when I would give my new hubby that beautiful chess table. I look over at my brother and he has a note for me. He passes it down, and I read, “I forgot the chess table back in Storrs. Sorry.” Now I know why he positioned himself so far away from me. So I couldn’t kill him.

I am a writer, wife, mother, and grandmother who thinks you're never too old until you're dead. My inspiration is Grandma Moses who became a successful artist in her late 70's. If I don't do something pretty soon, though, I'll have to find someone older for inspiration.
View all posts by Coming East →
This entry was posted in Just Blogging and tagged Christmas, Christmas presents, family, humor, life, memories, personal. Bookmark the permalink.