…and then there are the rest of us. I admit I am a forgetful person. Some people, like my husband, are natural list makers.  My husband usually makes a list of things for me to do each day, now that I’m retired and he is still working. Without that list, too many things wouldn’t get done. Once he tried to get me to make my own lists. I did. Then I forgot I had made a list, and when my husband reminded me I had made one, I forgot where I put it.

My father was the king of list makers and note takers. He was Head of Structures for Sikorsky Aircraft and was chief of the team that designed the airframe and landing gear of the Blackhawk helicopter. For an engineer, my father was amazingly well-rounded. He loved classic literature and often quoted Quo Vadis or recited a poem of Francois Villon, a French vagabond poet of the Fifteenth Century. When he was eighty-one he took up water color painting. He had dabbled in painting many years before when he created a little art studio for himself in our basement in Connecticut. When he painted his first nude, my mother asked him where he got his model. My father’s reply? “It’s from memory.”

I came across some of his notes the other day while I was going through some of my desk drawers. He kept his list and notes on 3X5 cards prior to the computer age. I found cards that listed every house he had bought, when he had purchased it and what the purchase price was, the square footage, the size of the lot, and what he had sold it for. Another card listed all his automobile purchases, beginning with his 1942 Nash, the list price and what he actually bought it for and the mileage when he sold it. It was a fascinating look at the changing value of a dollar, and I didn’t have to research it online. 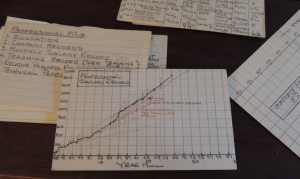 Who graphs their salary record? Oh, yeah, my dad.

Anyway, I’m just dragging my feet right now. I need to go look at the list my husband has left me or nothing will get accomplished today. Now where did I put it?

I am a writer, wife, mother, and grandmother who thinks you're never too old until you're dead. My inspiration is Grandma Moses who became a successful artist in her late 70's. If I don't do something pretty soon, though, I'll have to find someone older for inspiration.
View all posts by Coming East →
This entry was posted in Just Blogging and tagged engineers, family, life, memories, personal, Sikorsky Aircraft, Sikorsky UH-60 Black Hawk. Bookmark the permalink.

39 Responses to Some People Are List Makers and Notetakers…