A Snapshot of Ireland

Today’s post is a guest post by my brother, Mark Rich, who recently returned from Ireland after a two-week stay with his wife.  My brother has always been a talker and loves to engage strangers in conversation.  His gentle and affable personality puts people at ease, and they end up pouring out their life stories.  Here, then, is my brother’s post, a vignette from a day in Ireland.

We stood in front of the coffee booth. The large man assured us that the coffee would be ready soon.  But we were patient, just enjoying the ambience of this little coastal village farmers’ market in southern County Cork in Ireland.   This was our third farmers’ market in three days: Friday was in Bantry, Saturday was in Skibbereen, and now this one in Schull (pronounced “skull”).  The large man joked with us and then a smaller man came over and joined the conversation. He was a friend of the large man. The smaller man started talking about coffee and the weather and I said, “You’re not from around here, are you?”

“Heavens no, I’m from England originally but live here now.” He added that both of them were from England. I suspected this but was just trying to start a longer conversation.

When we finally got our hot coffee, it was much appreciated in the chilly morning air. The men asked where we were from. We said “Virginia,” and they knew where in the U.S. that was. Somehow the conversation led to them telling us how experienced they were, owing to their being older. I said “I bet that I’m the oldest.” I figured if I was right they’d be surprised, and if I was wrong, they’d feel complimented.  The large man was in his late 50’s and the smaller man was 63.  At 65, I was the winner.  I should have made a real bet, like free coffee.

The large man was increasingly more occupied with customers, many of whom were regulars from the village and nearby areas. So the smaller man stayed with me and kept up a good conversation. He had four grown children and was on his second marriage.   From England he had moved to New Zealand and lived there for seven years before finally settling down in Schull. They loved the West Cork lifestyle – rural, small quaint towns and villages, no traffic, rugged coastline and lots of hills and small mountains. He was a free range chicken farmer and loved it (his wife was staffing their chicken booth) but said he did it as a hobby because they didn’t really need the money.

We talked a little about politics – always a dangerous proposition – but it was limited to healthcare and taxes. The most welcomed and unexpected comment he made concerned, well, us. We were talking about healthcare and healthy living and about taking responsibility for your health, preventative care and such when he paused and looked directly at us and said, “I don’t mean to say anything that might offend you, but Americans tend to be, well, rather large and, with no disrespect, and I mean this in a good way, you two are fit and skinny.” Wow! Skinny! To be truthful we were wearing light jackets (after all, this was peak summer in Ireland and it does get warm) and that may have contributed to his (mis)observation. Skinny may not have been good in the 6th grade, but at 65 years old it sounded grand.

Two old Irishmen (the one on the bottom is my brother): 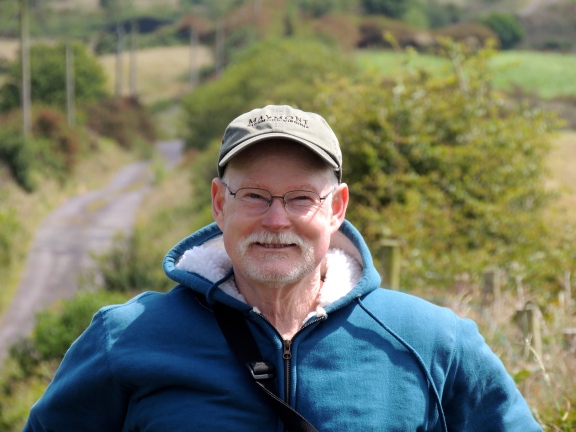 I am a writer, wife, mother, and grandmother who thinks you're never too old until you're dead. My inspiration is Grandma Moses who became a successful artist in her late 70's. If I don't do something pretty soon, though, I'll have to find someone older for inspiration.
View all posts by Coming East →
This entry was posted in Favorite posts and tagged family, Ireland, life, personal, Travel. Bookmark the permalink.

18 Responses to A Snapshot of Ireland