My Flirtation With Gambling 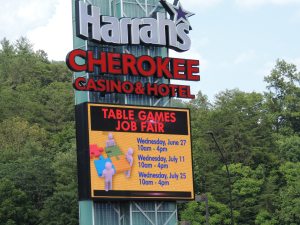 While we were in the Asheville, North Carolina area, we spent a day on the Indian  reservation in Cherokee.  We started with the museum there and then headed to the casino for lunch.  Of course, you can’t go to a casino and not drop a few coins in the slot machines.  My husband never worries that I’ll get carried away.  I don’t like to play anything higher than the nickel slots, and once I’ve lost ten dollars, I’m done.  Sometimes I can sit for an hour before I lose that much.  Other times, ten dollars is gone in ten minutes.  The expression “Easy come, easy go” is not one I live by.  I would change it to “Hard to come by, hard to let go.”  That being said, I enjoy flirting with the possibility of winning the pot of gold, which, if you are playing nickel slots, would probably only amount to a few hundred dollars.  Could be worse.  I could play the penny slots.

When my father-in-law was alive, he and my husband used to play the lottery together.  We were living in Texas where there wasn’t a lottery yet, and my father-in-law lived in Connecticut, which had one.  My husband would send him money and he would play twice a week.  Any winnings were split down the middle.  We usually didn’t win much, but once we split $1600.  We felt like we had hit the jackpot.  Once Texas got their own lottery, we stopped playing together.  On a recent visit, our son and daughter-in-law gave my husband numbers they wanted him to play each week.  Like father, like son.

Yes, we only have one chance in several million, but don’t gamblers feel that somebody has to win, so why not them?  We only expend $2.00 a week to feed our habit.  I can’t understand people who will blow an entire paycheck or go into debt trying to strike it rich.  It’s a deadly addiction.  Everyone is a gambler though, in the game of life, as this song sung by the great Ethel Waters attests to:

I am a writer, wife, mother, and grandmother who thinks you're never too old until you're dead. My inspiration is Grandma Moses who became a successful artist in her late 70's. If I don't do something pretty soon, though, I'll have to find someone older for inspiration.
View all posts by Coming East →
This entry was posted in Just Blogging and tagged Asheville North Carolina, Cherokee, Ethel Waters, Gambling, Indian reservation, life, Lottery, personal, Slot machine. Bookmark the permalink.

26 Responses to My Flirtation With Gambling