My brother and sister-in-law have been visiting us this weekend, and yesterday we went to the Pungo Strawberry Festival here in Virginia Beach. Pungo is a rural area of our city with many farms close to the North Carolina border. 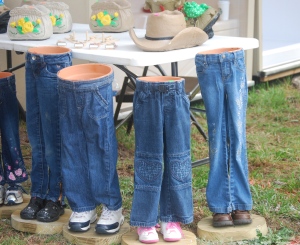 Drat! If only I had a place to put these planters…

The fair was a small-town affair with its usual array of country crafts, homemade soaps, jams, jellies, and pickles.Food offerings consisted of smoked turkey legs, pulled pork barbecue, funnel cakes, and lots of strawberry shortcake. There was a small midway and a livestock barn. Sadly, we missed the pig races. It was a scene played out in small town after small town across this country during Memorial Day weekend. 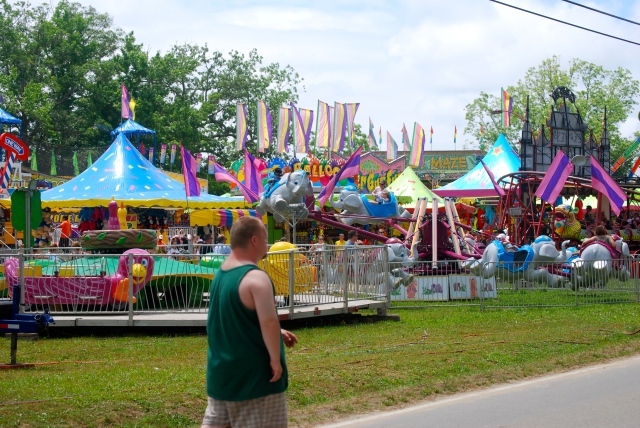 Not quite Coney Island

It reminded me of growing up in my own small town of Fairfield, Connecticut. Memorial Day was a festive affair starting with a parade down the middle of the Post Road. I played the piano with our school orchestra during the school year, but once the beginning of May came, I abandoned the keyboard and strapped on my bell lyre to practice Sousa marches with the band in preparation for marching with them on parade day.

Once the parade was over, my family spent the rest of the day with my mother’s best friend and her family, playing bocce and feasting on hamburgers, hot dogs, and my mother’s famous potato salad. The brother of my mother’s friend always brought his banjo, which fascinated me, and he showed me how to play it. He even loaned me one for awhile, but after struggling with sore fingers on those double strings that felt like razors, I returned the banjo in short order.

Yesterday we came home in the early afternoon, the three old people took naps, leaving me alone to do some writing, and then we grilled corn on the cob and steamed lobster tails. Today we will do the requisite hot dogs and watermelon, and another Memorial Day weekend will be over for the year. People may say we missed the whole point of Memorial Day, that it is a day to remember those who have served their country in the Armed Services, those who have fought and those who have died protecting their country. But I say that we can hold them in our hearts while we celebrate what they have fought and died for. Family, Friends and Freedom. The point has not been missed by us.

I am a writer, wife, mother, and grandmother who thinks you're never too old until you're dead. My inspiration is Grandma Moses who became a successful artist in her late 70's. If I don't do something pretty soon, though, I'll have to find someone older for inspiration.
View all posts by Coming East →
This entry was posted in Just Blogging and tagged community, family, home, life, Memorial Day, Patriotism, personal, Pungo Strawberry Festival. Bookmark the permalink.