I have always wanted a house with a big front porch.  Big enough to have a porch swing.  Big enough to fit my whole family and then some.  I remember my grandparents in Ohio having a porch like that, and I remember how I loved to sit in the swing and watch the world go by.  At night, when I was small and had been put to bed, I would listen through the open window as the adults sat on the porch, laughing and sharing stories, the hot summer breeze rustling the curtains as their voices drifted into my upstairs room.

I remember when it was customary for people  to sit out on their front porches in the evening or on Sunday afternoons.  They’d bring out new babies and show them off to the neighbors.

My grandfather and oldest cousin, circa 1945

They’d share the latest neighborhood gossip and activities.  You knew if someone was ill and needed a casserole, or if someone was out of work and just needed to talk. You felt close to the people on your street because you’d watch them walk by and they’d stop to talk to you while you sat out on your front porch, and you’d do the same when you walked by theirs.

My great-grandfather, two great uncles, my grandmother, and in front of them, my mother in the middle of her two cousins

When did people stop sitting on their front porches?  Was it when television became so popular?  Was it when people moved out farther from the center of town and their homes had big back yards?  They built patios and bought picnic tables and never ventured out to their front porches anymore except to leave their houses.  People lost touch with what was happening in their neighborhoods.  They didn’t know who moved out and who moved in or who was ill, or who had died.  I know because a few weeks ago when I talked to my next door neighbor,  I found out that her husband had died.  I cried because I didn’t even know he had become so ill, and I never got to say goodbye. 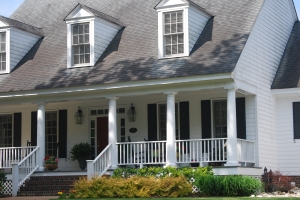 One of my favorite walking routes takes me through a neighborhood with houses that have lovely front porches.  No matter what day I walk, I have never seen a soul sitting on one of them.  They are exactly the kind of porches that I have always wanted.  Big and shady, places for rockers and porch swings.  People should be out on them, sitting in the afternoon heat, drinking iced tea. 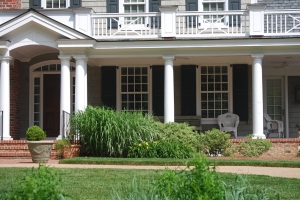 If one of them were mine, you can bet I’d be sitting on it, watching the world go by.

I am a writer, wife, mother, and grandmother who thinks you're never too old until you're dead. My inspiration is Grandma Moses who became a successful artist in her late 70's. If I don't do something pretty soon, though, I'll have to find someone older for inspiration.
View all posts by Coming East →
This entry was posted in Just Blogging and tagged family, home, life, neighbors, personal, Porch, relationships. Bookmark the permalink.