I read an article the other day that said nobody wants to read another blog about writing. Apparently, there are too many out there already.  I was unaware of that, but I don’t want to be accused of adding to that plethora, so I will state upfront that this is not a post about writing.  Not really.  It’s about creativity and our response to it.  And it’s about discipline, too.

A few weeks ago, shortly after my Hampton Roads Writers’ conference, I went to Michael’s, a craft store, and bought a bunch of fine-point art pens with ten different colors of ink and a large art pad of unlined drawing paper.  It was for planning out my novel.  I bought them in response to one of the workshops I attended at the conference.  One of the authors said planning on unlined paper will stimulate the right side of your brain.  I added the colored pens to make it even more fun.  I brought my choices to the cashier, a young girl in her early 20’s or perhaps not even out of her teens, and she asked me if I was an artist.  I said no, I wasn’t an artist, I was a writer, and these items were to help with my creativity.  She got excited.  “What are you writing?” she asked.  I wanted her just to ring up my items and let me get out of there.  I didn’t want to talk about what I was attempting to do.  I mumbled something about writing a novel, hoping that would be the end of it.  “Wow!  A novel!  What’s it about?”  I did not want to talk about it to this stranger.  I should have just said I was buying art supplies for my granddaughters or something else that would shut. her. up.  I told her I was just beginning it and wasn’t ready to talk about it yet.  Before I could finish, she said, “Oh, do you need an illustrator?  I’m a great illustrator.  Let me give you my number and …” I interrupted her and told her that no, I did not need an illustrator.  My novel was definitely not going to have pictures, and I was sorry, but I was in a hurry, so could she just ring me up. 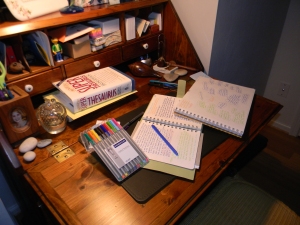 On my way home, I thought about how insecure I felt mentioning that I was writing a novel, as if it made me look like I thought I was really a writer, and how egotistical is that?  Besides, if you tell people, then they might really expect you to put your money where your mouth is.  So, now I’ve really done it.  Shary Hover, another blogger and wonderful writer, challenged me to participate in NaNoWriMo, National Novel Writing Month, that starts November 1.  The goal is to write 50,000 words of your novel during the month of November.  There is no way I can possibly write that many words, especially since I will be taking one week off  when my husband and I will be spending Thanksgiving week with all my children, their spouses, and my two lovely granddaughters.  But can I write 20,000 words?  I don’t know, but I can set that as a personal goal and work towards that.  No matter how close I get, I’m willing to bet that it will be considerably more than what I would have produced had I not challenged myself, so thank you, Shary, for urging me to go for it.

Isn’t that the way it should be for anything we hope to accomplish? We may be nervous about sharing our plans lest we make fools of ourselves in our eyes.  I don’t know why creativity brings out the insecurities in us.  After the month of November is over, I might just set another goal for myself:  To practice my violin one hour a day until I can make it sound sweet enough, my husband doesn’t run upstairs to use the shredder.

I am a writer, wife, mother, and grandmother who thinks you're never too old until you're dead. My inspiration is Grandma Moses who became a successful artist in her late 70's. If I don't do something pretty soon, though, I'll have to find someone older for inspiration.
View all posts by Coming East →
This entry was posted in Just Blogging and tagged blogging, creativity, life, NaNoWriMo, National Novel Writing Month, personal, Writers Resources, Writing. Bookmark the permalink.

36 Responses to Oh, no! NaNoWriMo!