Can We Get Back to Normal Now?

Last week was a strange week.  We had both an earthquake and a hurricane.  Mother Nature can be quite entertaining.  The earthquake was a surprise because it is rather an unusual occurrence on the East Coast, especially one of that magnitude, 5.8.  I was sitting on the couch, minding my own business, when the couch and I began swaying side to side.  Then the blinds were swaying back and forth and the light over the kitchen table was swinging merrily.  Hmmm….I said to myself; we’re having an earthquake (I’m a quick study).  I immediately (well, after the room stopped rocking) turned the TV on and, sure enough, the earthquake was all over the news, on every channel.  Maybe not on HGTV.  Nothing pre-empts HGTV.

Friday afternoon my husband came home early from work so we could finish stocking up on water and other essentials before Hurricane Irene hit.  We went down to the Oceanfront to see if the waves were picking up, which they were.  Businesses were boarded up and the news truck was out. 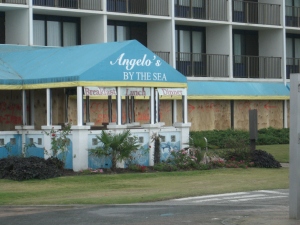 Early Saturday morning, around 3 A.M. we were awoken by torrential rain.  We managed to get a few more hours of sleep and finally arose at 6:00 and went downstairs to make some coffee and listen to the wind howl.  We kept our power until sometime in the afternoon.

We sat by the window in what little light it afforded and played Chinese checkers and drank wine.    The worst of the storm hit us about 8 P.M.  When it became obvious that we had escaped any major problems, we went to bed, lulled by the still fierce winds.

Sunday morning, with all the churches closed, we went down to the Oceanfront again, early, to survey the damage.  The fishing pier was damaged and the beach was littered with debris, but the beach was in much better shape than it had been two years ago when we were hit with a devastating Nor’easter.  Though the angry sea was no longer angry, it still yielded some beautiful waves, and the surfers were out in force. 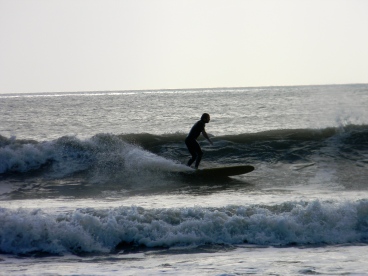 Early Sunday evening we went back to the Oceanfront for my usual Sunday night Dairy Queen routine, and afterwards we drove through a few noisy neighborhoods humming with the sound of generators.  Since our house is on the same circuit as the hospital two blocks away, we were lucky and got our power back quickly.  Other neighborhoods were not so fortunate.

Now it is Monday morning.  Many of the schools are closed today but will open tomorrow and we will be back to normal, at least until the next time Mother Nature decides to play with us.

I am a writer, wife, mother, and grandmother who thinks you're never too old until you're dead. My inspiration is Grandma Moses who became a successful artist in her late 70's. If I don't do something pretty soon, though, I'll have to find someone older for inspiration.
View all posts by Coming East →
This entry was posted in Just Blogging and tagged events, weather. Bookmark the permalink.

42 Responses to Can We Get Back to Normal Now?