Last night my husband and I were watching Antique Road Show on Public Television, and we were amazed at how much money people’s old things were appraised at.  A man who bought some posters of railroads for a dollar could turn around and sell them for a thousand dollars apiece, and he had twenty-four of them!  Another man had an old, nearly life-size Chinese pottery statue, chipped and faded. Rather ugly, if you ask me.   It wasn’t even particularly old, maybe dating back to the twenties.  We were sure that the appraiser was going to tell the man that what he had was a piece of crap, but lo and behold, he told the man that he could get upwards of $40,000 for it at auction.

That leads me to wonder what we might have hanging around the house that could bring us some money in these hard economic times.  I’ve been puttering around looking for treasures all morning, and I think I’ve come up with some good ones.  I’m just going to put them out there and let you, dear reader, be the appraiser. 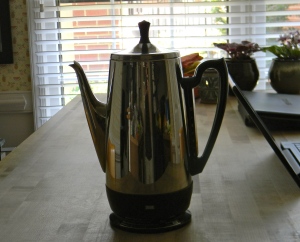 This predates the grind and brew drip systems and the coffee makers that use a little pod for each cup.  It has been making great coffee for 40 years, outlasting five drip machines.  No stainless steel carafe is needed because it is stainless steel.  Though it is definitely a great find, it is not nearly as valuable as my yellow enamelware stove-top percolator would be if I still had it.  For the edification of you youngsters, we actually used to make our coffee on top of a fire to rave reviews.  Electricity hadn’t been invented yet.

Second, my dishwasher.  Looks like heck, but it still runs, so I can’t justify getting a new one.  We had thought about getting one of those new ones that can be running while you stand right next to it, and you wouldn’t even know it.  This conversation we had last night when we went upstairs to bed changed my mind:

Me:  Did I start the dishwasher? 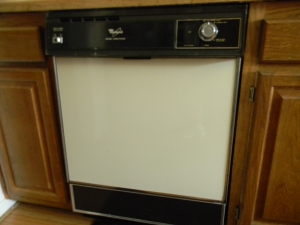 Husband:  I don’t know.  I saw you put detergent in it.

Me:  Yeah, but did I actually start it?

Husband:  I think so, but why don’t you check.

I go to the top of the stairs, and sure enough, I hear it loud and clear.

Husband:  Good thing we don’t have one of those quiet ones because you’d have to go all the way downstairs to check. 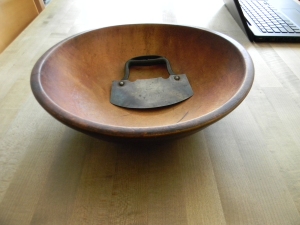 She made the best chopped  chicken liver and taught me how to make it.  This is the bowl and blade she made it with, and I claimed it when she died.  After all, I am the only one left who knows the recipe.  Unfortunately, now that we know about such things as high cholesterol, liver is a no-no, and schmaltz (rendered chicken fat) is definitely taboo.  I haven’t used this bowl for many years now.  What I wouldn’t give for a chopped chicken liver sandwich on rye with a big slice of red onion.  Anyway, the bowl and blade are ancient, so what do you think I could get at auction for them?  The liver smell is completely gone.  I swear.

What treasures are hiding in your home?

I am a writer, wife, mother, and grandmother who thinks you're never too old until you're dead. My inspiration is Grandma Moses who became a successful artist in her late 70's. If I don't do something pretty soon, though, I'll have to find someone older for inspiration.
View all posts by Coming East →
This entry was posted in Just Blogging and tagged Antique, Coffeemaker, economy, home, humor, life, marriage, nostalgia, personal. Bookmark the permalink.