A Mind of Her Own

Every Sunday we call my mother-in-law to see how she’s doing.  She lives in Connecticut while we live states away in Virginia, and though we are certainly closer than we were when we lived in San Antonio, it is still a nine-hour drive to get to see her.  We’ve managed to make that drive nearly every three or four months since we moved here two and a half years ago, but the older Mom gets, the more time we wish we could spend with her.

She will be eighty-five years old this year.  Whenever we talk to her, though, we find fewer reasons to worry about her.  She seems to have life under control.  Take this most recent conversation with her:

“I was baking my honey cake to take to church, and my oven gave up right in the middle.  I had to go to the store and buy a poppy seed cake.”

“So you’ll have to buy another one.  At least it’s a wall oven, so you don’t have to replace the whole stove.”

“No, I’m not buying another oven.  Why do I need another oven at my age?  I have the microwave and my stove and my little toaster oven.  That’s all I need.  From now on, I’m not cooking for anybody (my husband’s three sisters and their families live near her).  No roast beef for them.  Let them eat ham.  That’s all I’m making for them.  Just ham.”

Yes, Mom may be old, but she’s feisty! 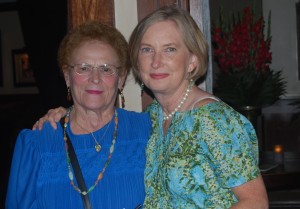 My mother-in-law and me

I am a writer, wife, mother, and grandmother who thinks you're never too old until you're dead. My inspiration is Grandma Moses who became a successful artist in her late 70's. If I don't do something pretty soon, though, I'll have to find someone older for inspiration.
View all posts by Coming East →
This entry was posted in Just Blogging and tagged aging, family, life, women. Bookmark the permalink.

23 Responses to A Mind of Her Own