When I was a child, one of my favorite books was Maguerite Henry’s Misty of Chincoteague.

It is about the wild ponies on Assateague Island and how the volunteer firemen in Chincoteague swim them across a small channel and herd them through town to auction some of them off every July in an event called Pony Penning.  The purpose is to thin the herd and keep it healthy, and thousands of people inundate the tiny town of Chincoteague, on the Eastern Shore of Virginia, to watch the affair and enjoy the festivities that follow.

Ever since I read that story when I was eight, I wanted to go to Pony Penning, but we lived in Connecticut, and Virginia seemed so very far away, I didn’t think I would ever get there.  We moved to Philadelphia when I was pregnant with our third child, and my hopes of attending were stirred up again, only to be dashed two years later when we moved to San Antonio.  Jump thirty years ahead, and here I am—living in Virginia, less than two hours from Chincoteague!  We pass the turn-off to that little town every time we drive up the Eastern Shore to Connecticut or Boston.  One time, on our way home from New England, we stopped for an hour to see if we could get a glimpse of the ponies, and they accommodated us by grazing right near the road.  I was able to capture a couple of quick pictures. 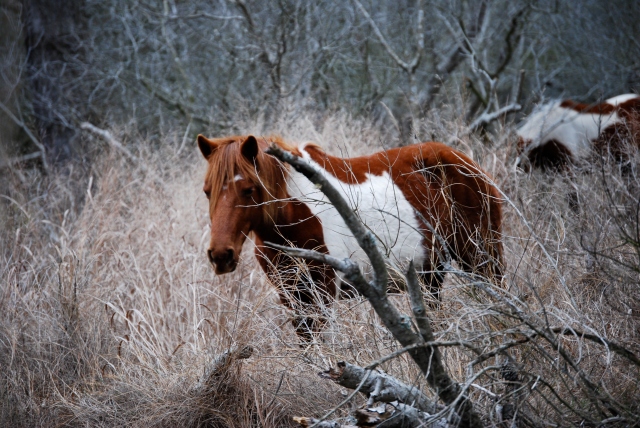 Ponies we saw on our first visit

Since it was winter, all the little shops were closed, and we vowed to return in the summer.

Sunday we decided to do a scouting expedition to Chincoteague and check out what bed and breakfasts or hotels looked good, see the shops that would now be open for the season, and, of course, see my beloved ponies.  We stopped at the entrance of the Assateague Wildlife Preserve to pay the entry fee, and my husband noticed that it was eight dollars to enter for the day, but only ten dollars for a lifetime pass to all the National Parks and Preserves in the country if you were sixty-two.  My husband told the park ranger, a sweet young lady, that we wanted to purchase one of those passes.  She asked him, “Are you sixty-two?”  “No,” he responded quickly and forcefully, then stuck his thumb in my direction and said, “but she is.”  “Wow!” said the young lady, looking sympathetically at me.  “He threw you right under the bus, didn’t he!”  My husband sheepishly apologized, but the smirk on his face made me doubt his sincerity.

We stopped at the visitors center to see a map of the trails and watched a short film on the ponies.  The narrator said the poor creatures are constantly ravaged by biting flies and mosquitos.  They showed quite a bit of footage of the ponies swatting the menacing bugs with their tails, or rubbing their hides raw against the rough bark of trees to give themselves some relief.  None of that registered with us as we started on the trail that led to a scenic overlook.  We parked our car near the start of the trail and entered the woods.  Immediately, the mosquitos and flies started attacking us.  My husband yelled, “Take off your cap and start swatting them.”  I did as he said, but as soon as I chased them off one arm, they went for the other arm and my face and my legs.  Nevertheless, it was better than not swatting them at all, and my arms quickly became exhausted from the flurry of activity.  When my husband noticed the back of my shirt was a solid sheet of black insects, he began belting me with his hat to chase them off.  “Do you want to turn around?” my husband asked.  “No, I have to see my ponies!” I said.  We continued through the forest on our way to the pasture, stopping for only a few seconds to watch in awe as two bald eagles screamed their way through the canopy of loblolly pines.  After twenty agonizing minutes of pure torture, we arrived at the lookout.  We stared out at the magnificent marsh, the magnificent empty marsh.  No ponies.  None.  We waited, scanning the pasture, squinting to see if there was any movement in the distant trees.  Nope.

Where are my ponies?

My husband and I looked at each other with the realization that we were going to have to return through the gauntlet.  I launched myself once more into the woods, my husband trying to match my pace.  “You back to power walking?” he asked.  “No, I just want to get to the car with some of my flesh still intact.”  We began our swatting act again.  “I don’t know what hurts more,” I said to my husband.  “The biting flies and mosquitos, or you beating me with your hat!”

We passed a bench on the trail, though why anyone would want to stop in that place, heaven only knows.  It had an inscription on it in memory of someone named Art.  “Here lies Art,” I said, “ who died while trying to escape the monster insects.  If he’d only been quicker…”  We picked up our pace.  Passing another bench that was devoid of an inscription, my husband said, “This once is waiting for us.  Here lies George and Susan whose bloodless bodies were found just inches from their car.”  I wasn’t in a laughing mood.

We left the park shortly after and visited the shops and had a nice dinner at Bill’s.

But I was done with my dream of attending Pony Penning.  I scratched all the way home.  Well, maybe if we applied some heavy duty insect repellent or draped ourselves with mosquito netting we could…shut up!  Just shut up!  And pass the calamine lotion.

I am a writer, wife, mother, and grandmother who thinks you're never too old until you're dead. My inspiration is Grandma Moses who became a successful artist in her late 70's. If I don't do something pretty soon, though, I'll have to find someone older for inspiration.
View all posts by Coming East →
This entry was posted in Just Blogging and tagged Assateague Island, bucket list, Eastern Shore of Virginia, humor, life, marriage, nostalgia, Pony Penning, postaweek2011, trave;, Virginia. Bookmark the permalink.