My brother loves a bargain and he’s a master at finding one.  Not only is he a master, he loves showing me his prowess every time I see him.  He’ll come home with seven free quarts of spaghetti sauce from Maggiano’s, our favorite Italian restaurant in Richmond, or coupons for free coffee or donuts, or pay half or less the advertised retail cost of something.  I’m waiting for the day when he tells me that a merchant actually gave him money to take the merchandise.

I, too, love bargains, but I’m not quite as adept at it as my brother.  I always wanted a silk flower arrangement composed of nothing but hydrangeas.  Coming from New England, I missed hydrangeas when we lived in San Antonio because they reminded me of the sea, and we were far from the shore.  Hydrangeas filled the gardens of nearly every silver-shingled Cape Cod along the coast.  So when I saw a large milk white vase on sale at a furniture store, I knew it would be the perfect container for my hydrangeas.  It was such a bargain—a $78 vase on sale for $15.  And it had seashell handles on opposite sides, a clear sign it was meant for me.

Once I got it home, it seemed quite a bit larger than it had appeared in the store.  But hydrangeas are large, I reasoned, so it would fill up pretty quickly.  When I went to Michaels, the silk flowers were not on sale.  The hydrangeas were four dollars a stem.  I splurged and bought five stems, five dollars more than the vase cost, but still cheap for a silk arrangement.  I couldn’t wait to get home and put the flowers in my vase.  But when I did, they were swallowed up in the immensity of whiteness.  Since I didn’t want to file for chapter 11, I waited until Michael’s had a flower sale and I bought ten hydrangeas for two dollars each.  I came home and placed them lovingly into the vase—where they promptly fell over and nestled against the side with the original five.  My husband suggested I get florist’s foam to give them an anchor.  I came back from yet another trip to Michael’s with not only florist’s foam, but another five hydrangeas.  Ah–now we were getting somewhere.  With the foam in place and the twenty hydrangea stems carefully placed, it was obvious that I would only need about twenty more stems to make my arrangement look presentable.  And that it did.  After four trips to Michael’s and eighty dollars worth of hydrangeas, I was finally rewarded with the beautiful arrangement I had desired.  And what a bargain–the vase cost me only $15! 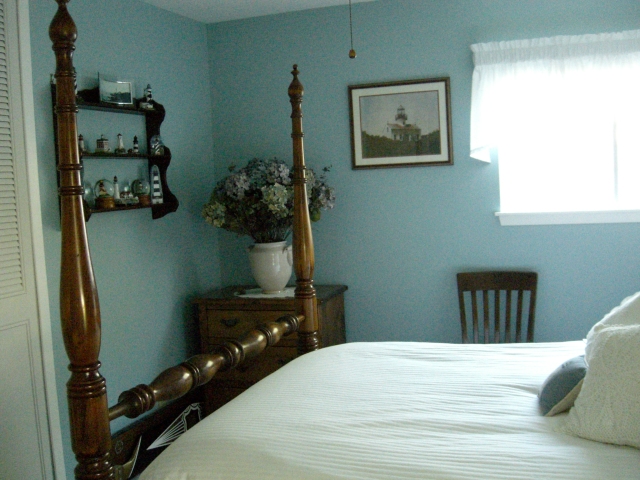 I am a writer, wife, mother, and grandmother who thinks you're never too old until you're dead. My inspiration is Grandma Moses who became a successful artist in her late 70's. If I don't do something pretty soon, though, I'll have to find someone older for inspiration.
View all posts by Coming East →
This entry was posted in Just Blogging and tagged bargain hunting, bargains, Cape Cod, home, humor, Hydrangea, lessons, memories, New England, women. Bookmark the permalink.