Last night, as I was standing at the stove stirring a pot of lentil chili, I felt my husband staring at me from his usual perch at the kitchen work table.  Yes, youngsters, when you’ve been married for nearly forty years, you can actually “feel” when your beloved is staring at you.  I turned toward my husband, and sure enough, he was sitting there, chin on fist, with the goofy grin of young love plastered on his face.  I gave him a questioning glance, and he said, “When I look at you, I still see that pretty little girl I fell head over heels in love with in college.” 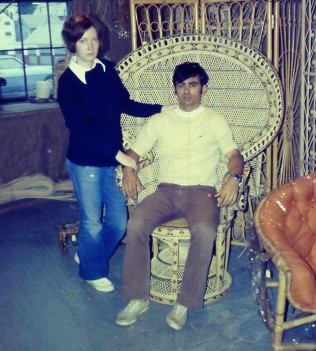 I took stock of my appearance.  I was wearing the $20 jeans I bought at Costco, an old UConn t-shirt, no make-up, and hair badly in need of brushing.  I put down my wooden spoon, smiled at my honey, then walked over to him, picked up his glasses, which he had laid on the table, placed them on his nose and said, “Look again.”

I am a writer, wife, mother, and grandmother who thinks you're never too old until you're dead. My inspiration is Grandma Moses who became a successful artist in her late 70's. If I don't do something pretty soon, though, I'll have to find someone older for inspiration.
View all posts by Coming East →
This entry was posted in Favorite posts, Just Blogging and tagged aging, life, Love, marriage, memories, nostalgia, relationships, University of Connecticut, women. Bookmark the permalink.